My husband had a Weimaraner as his Kappa Alpha Fraternity house dog in the 1950’s. At that time they were touted as the “wonder dogs”… they found the birds, retrieved them, cleaned them, cooked them, served the dinner and did the dishes. This was the beginning of the down years for the Weimaraner, too much of a good thing.

After several poodles, we got serious about another Weimaraner, our sons were getting interested in hunting. Our oldest son, Jimmy, bought Dixie with all his savings, $125.00. In desperation, to save my house from total destruction, I took her to obedience classes at OTCPBC. We won first place and I was hooked….40 years later I am still at it. Dixie was my practice dog, and we did have a good time. I decided that if I was going to spend all day at the shows I wanted a Weim that I could do everything with. I loved Bill Meyers’ Ch Sandstorm Travis McGee and waited until a bitch we liked was bred to him. I found the perfect puppy, bred by Barbara Didjurgis. Eb’s Weimaraners, and I did EVERYTHING with her and became totally involved in the world of dogs. My friends used to tell me, “Just put Breezy in her crate with the book, in the morning she will know how to do it”; she was that kind of dog. That was my foundation bitch, Ch EB’s Ketch a Summer Breeze, CDX, TD, RDX, SDX, VX…..hence my kennel name, Seabreeze.

To date, there are over 60 bench champions bearing the Seabreeze name, including 1 CH/OTCH, and 4 Grand Champions.  Many also earned obedience, hunting, rating, agility and tracking titles, including the first dog to be awarded the AKC VCD title, Ch. Seabreeze Seraphim, CD,OA,OAJ,TDX,NRD,VX, as well as Ch. OT Ch Eb’s Red Hot Seabreeze, JH, UDX,NA, NRD,VX, the first Weimaraner bench champion to earn an Obedience Trial championship, and she is still in the Top 10 for Obedience.

I have been very fortunate that Judy Colan trusted me enough to let me have a daughter from Fergie (Ch. Aria’s Allegra of Colsidex). Annie (Ch. Colsidex Seabreeze Bet the Farm, TDX), was almost the perfect dog and we have some wonderful puppies and grand-puppies from her; one of which was the No. 1 Weimaraner for 2006-2008. 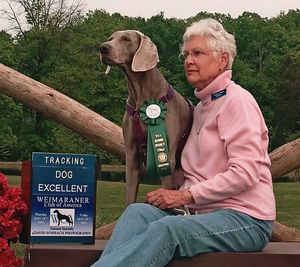 I have a Weimaraner and a Standard Poodle living at my house and lots of Weims that I co-own, living in wonderful homes. I can honestly say, I have never had a problem co-owning a dog, and after all these years I still love the sport of dogs and the people involved.

My background in the dog world started in the early 1970s showing my Cocker Spaniels in obedience. During those years, my traveling companion was Marge and her wonderful Seabreeze Weimaraners. In 1995, she gave me my very own Weimaraner …..I was hooked for life. I am honored to be a part of Seabreeze.

My current dog family consists of two Weimaraners. We occasionally have a litter of puppies and those puppies are raised in our homes as part of our family until they go to their forever homes. It is so rewarding to see these puppies thrive with their new families. The good friends and extended family we have as a result - is an added bonus.

Take a few minutes to wander through our website. There are lots of photos that will make you smile…….